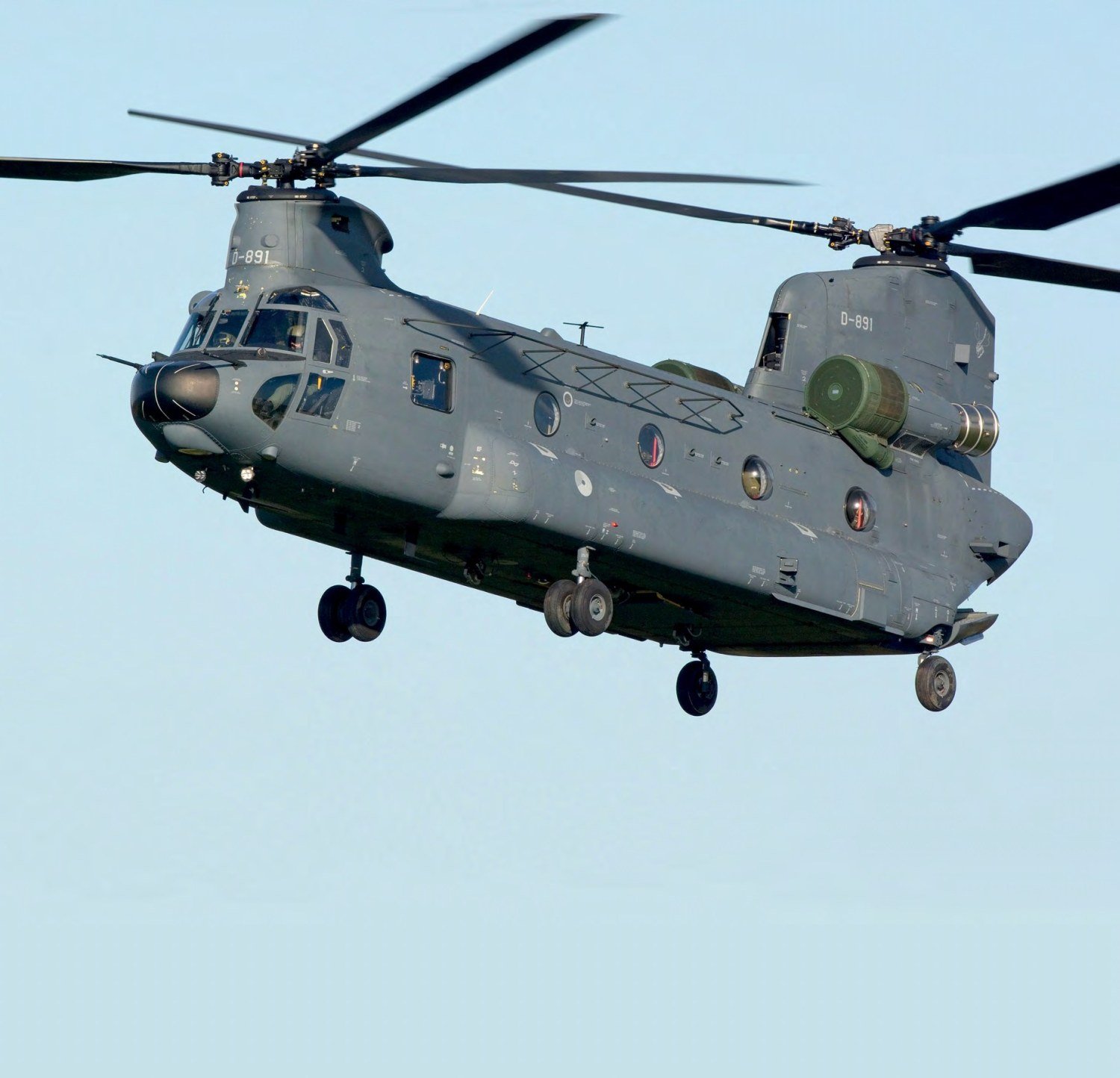 After production of the 14 new CH-47Fs for the DHC, Boeing will remanufacture the six CH-47F(NL)s – including this Fort hood-based example of 302 Squadron – to the same MYII CAAS configuration as the newly-built helicopters.
Kees van der Mark

THE DUTCH Defence Helicopter Command (DHC) is preparing for the future with a number of acquisition, upgrade and life extension programmes, enabling it to operate a mixed fleet of 80 stateof- the-art helicopters throughout the next decade.

The last of 20 Dutch NH90 NATO Frigate Helicopters ordered in 2000 was delivered in June 2016, four years later than originally planned. Yet it will take at least until 2020 before all 20 will be available to 860 Squadron (the operational unit) and 7 Squadron (training and evaluation) at Maritime Air Station De Kooy. Because NH Industries (NHI) delivered only the last seven NH90s in the agreed final configuration, the company is currently upgrading earlier examples in two separate programmes. NHI handed over the first seven helicopters in meaningful operational capable (MOC) configuration in 2010–2012. A further six followed in 2013–2014 in full operational capable (FOC) configuration, but lacked the final radar configuration (FRC). The first MOC aircraft entered upgrade to FOC/FRC configuration in 2014, while the last one arrived the NHI plant in Frosinone, Italy, last September. By early March 2018, just two upgraded NH90s had been redelivered to De Kooy, making it very doubtful that the goal of completing this upgrade programme in late 2018 will be met. A programme to upgrade six FOC helicopters to FRC configuration is scheduled to run from late 2017 until 2020.

Corrosion problems identified in 2013 are also dealt with while the NH90s undergo upgrades and base maintenance. All NH90s are also subject to a software update, as well as modifications to make them more suitable for the (maritime) transport role. Earlier plans to assign eight NH90s to 300 Squadron at Gilze- Rijen have been abandoned; all 20 will now be based at De Kooy. The NH90 full mission flight simulator delivered in early 2012, but only formally accepted on January 1, 2017, will relocate from Italy to De Kooy in the second half of 2018.

Later this year, the Terma Modular Aircraft Survivability Equipment (MASE) integrated self-protection system for the NH90, ordered in December 2014, will become operational. A final series of test flights was conducted over the North Sea on February 12–15.

The DHC will see its mixed Chinook fleet of 17 CH-47Ds and CH-47F(NL) s transform into a fleet of 20 CH- 47Fs within the next three years. The Dutch government accepted a letter of offer and acceptance from the US government for 14 new CH-47F Chinooks in multiyear II common avionics architecture system (MY II CAAS) configuration on November 12, 2015. They will replace the 11 remaining CH-47Ds introduced between 1995 and 1999. Whereas the CH-47F(NL)s delivered in 2012–2013 have a Honeywell avionics control and management system cockpit configuration to match that of the CH-47Ds, the new Foxtrots will be fitted with the US Army standard Rockwell Collins CAAS cockpit. The Dutch MoD decided to seek maximum commonality of its Chinook (and Apache) configurations with US Army helicopters, allowing more costeffective and speedy delivery without additional development costs. The new Chinooks were thus acquired off the shelf via the Foreign Military Sales programme and ordered as part of US Army batches: the first 12 on April 15, 2016, and the other two on April 28, 2017. Delivery of all 14 helicopters is expected in 2020.

Like US Army Chinooks, the Dutch helicopters will get the ALQ-212 advanced threat infrared countermeasures, including the AAR-57A(V)7 common missile warning system (CMWS). This system will be retrofitted after delivery. Dutch-specific modifications to the standard configuration – including crashworthy seats, a fastrope insertion/extraction system, an emergency locator transmitter, a hook load measurement system and an ice detection system – will be fitted during production.

The Dutch government assessed three options for the CH-47F(NL) fleet: operating both versions together, replacing the relatively new CH-47F(NL)s with six CAAS cockpit-equipped CH- 47Fs or upgrading them to CAAS configuration. Since the latter turned out to be the preferred option, a contract for their upgrade in 2020–2021 was signed with Boeing on December 14, 2017.

The first six new CH-47Fs will be delivered to 302 Squadron at Fort Hood, Texas, replacing the four currently based CH-47F(NL)s. Once Chinook air crews have converted to the new helicopter, the number of Fort Hood-based CH-47Fs will be reduced to four, allowing 298 Squadron at Gilze-Rijen to operate the other 16 helicopters. A decision has yet to be made on whether the CH-47F(NL)s will keep their winch after the upgrade or not. The DHC intends to continue operating these Chinooks until at least 2045.

The remaining 28 AH-64D Apaches of 30 delivered between 1998 and 2002 are assigned to 301 Squadron at Gilze-Rijen (20) and 302 Squadron at Fort Hood, Texas (eight). They are currently subject to a number of modification programmes. These include an upgrade to Block II configuration to keep them to the same operational standard as US Army AH-64Ds. The Block II upgrade comprises fitting new communication equipment including a high-frequency radio, replacement of some analogue systems with digital ones, upgrade of the identification friend or foe system to mode 5 standard, a blue forces tracker and a new data modem. This programme commenced in 2013 and was scheduled to run until 2019, but it will now take two more years, due to a delay in the implementation of the video downlink/uplink. Fort Hood-based Apaches are modified by Boeing at its Mesa, Arizona, facility, and the Gilze-Rijen-based helicopters get their upgrade at the Koninklijke Luchtmacht Logistical Centre at Woensdrecht Air Base.

Another programme running until 2025 sees the Apaches gain a new, integrated self-defence system designed to counter currentday surface-to-air missiles. The Netherlands selected the same AAR-57A(V)7 CMWS as fitted to US Army AH-64Ds and the new Dutch CH-47Fs. It will replace 13 Terma-built AMASE systems (from Apache MASE) rushed into service as an interim measure when Dutch Apaches deployed to Iraq and Afghanistan in 2004.

A separate programme aims at improving the Apache’s weaponry by 2021, including acquisition of later versions of the AGM-114 Hellfire missile and laser-guided 70mm rockets alongside the unguided version.

Looking further ahead, the Dutch government will consider having the Apaches remanufactured to AH-64E Apache standard. The US State Department announced its approval of the upgrade at an estimated cost of $1.191 billion on February 20, 2018. As proposed by Boeing and Lockheed Martin, the remanufacturing includes upgrading the T700-GE-701C engines to T700-GE-701D models, the ASQ- 170 Arrowhead modernised target acquisition designation sights and AAR-11 modernised pilot night-vision sensor and other equipment, as well as associated support. The upgrade also includes acquisition of 17 APG- 78 Longbow fire control radars.

The April 2011 decision to retire all 17 AS532U2 Cougars early and deactivate Gilze-Rijen-based 300 Squadron as a cost-saving measure was partly reversed later that same year. Due to delays in the availability of the NH90s, eight Cougars remained in service to avoid a shortage in transport helicopter capacity. Four more returned to operational status a few years ago and the other five remain in storage. Until last December, the Cougar’s retirement was foreseen for 2023, with the fleet reduced from 12 to eight in 2021 and down to four in 2022. With additional budgets now available for the armed forces, 300 Squadron will continue to be an operational squadron – with emphasis on the support of Special Forces – flying 12 Cougars until 2030. 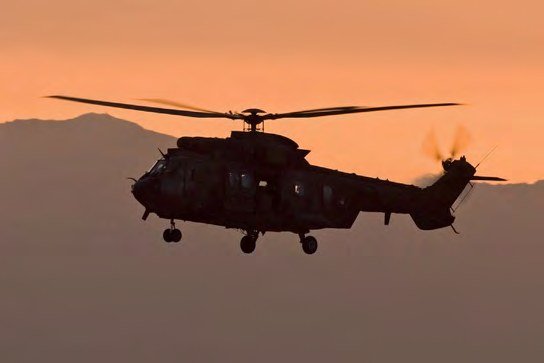 It was announced last December that 300 Squadron is saved from the axe after all and the Cougar will stay in service until 2030.
Kees van der Mark