A Time of Growth

Dominik Sipinski outlines how despite tough geopolitics and a weak Russian ruble, a convenient hub and a strong domestic market are helping Aeroflot Russian Airlines 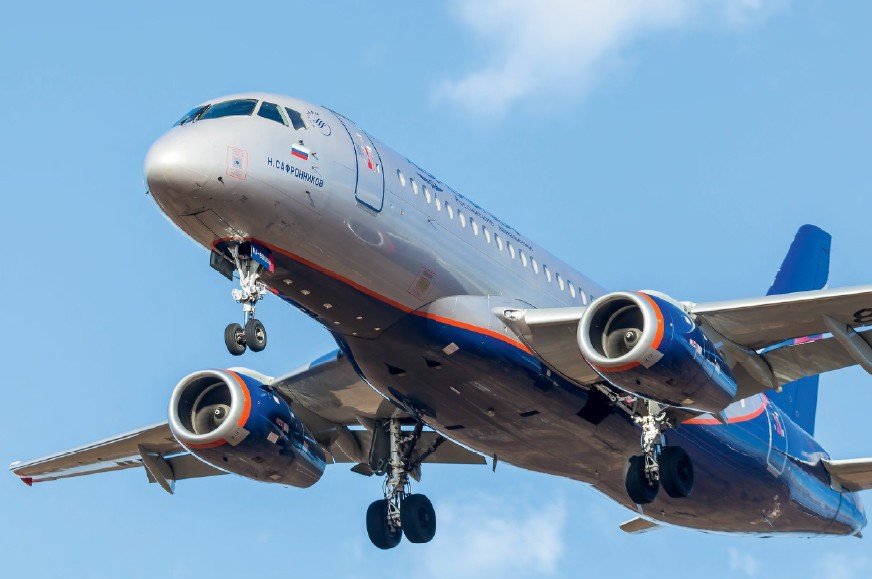 The introduction of more modern aircraft, such as this Sukhoi SSJ-100-95B Superjet RA-89058 (c/n 95098), and the retirements of Soviet-era aircraft has enabled Aeroflot Russian Airlines to reduce its average fleet age to around 4.2 years. More SSJ-100s, Irkut MC-21s, Airbus A350-900s and more Boeing 777-300ERs are all due to enter service in the coming years.
Alex Snow/AirTeamImages

In the first six months of 2017, the Aeroflot Group grew by 16.6% and carried nearly 23 million passengers. Aeroflot Russian Airlines itself, the biggest airline within the group, posted equally impressive 13.5% growth and carried over 15 million customers. Such a growth rate puts Aeroflot among the fastest-growing big airlines in Europe, on a par with Ryanair and Lufthansa Group. However, while Ryanair’s growth has long been fuelled by new aircraft deliveries and Lufthansa’s is an outcome of taking over Brussels Airlines, the Russian carrier’s growth in the region is surprising to many.

Russian GDP shrunk by 3.7% in 2015 and by a further 0.2% in 2016. While the forecasts for 2017 are above zero, the growth rate is not expected to exceed 2%. With such a weak economy, it would be reasonable to expect tough times for the airline, too; it is universally accepted air traffic growth and GDP are closely correlated.

Air traffic at Moscow area airports declined in 2016 by 1.9% and in the whole country by 4.1%, according to the Russian Federal Air Transport Agency, but Aeroflot, the biggest air carrier in Russia, seems to defy this data. In 2016 its traffic grew by 10.3%, and it looks as though it even benefits from the tough market circumstances.

By 2025, the airline intends to be among the five biggest European carriers in terms of revenues and passengers carried. In 2016, it was ranked fifth and seventh on these measures respectively, having carried 43.4 million passengers, recording RUB 495.9 billion revenues and posting RUB 38.8 billion net profit.

The airline’s revenues and passenger numbers have been growing at a sustained double-digit rate over the last five years, while adjusted net profit has also been improving every year. With the current pace of growth, it seems the group might achieve its goal well ahead of the target.

The astounding growth rate of Aeroflot in the last few months has been enabled by the very same factor that many saw as a serious challenge to the airline’s business: economic crisis in Russia.

One of the most important points was the depreciation of the ruble. The Russian currency lost nearly half of its value to the dollar in the second half of 2014 and has been priced very low ever since. Despite a slow increase in its value since the low point in January 2016, the ruble is still worth around 40% less than three years ago.

While that is bad news for Russian importers, the airline benefits from it, especially in combination with lower fuel prices. The Aeroflot press bureau told AIR International: “We managed to convert the market instability into our competitive advantage,” referring to the fact that a significant share of the airline’s revenues is in dollars, while most of the costs, including fuel, are paid in rubles. 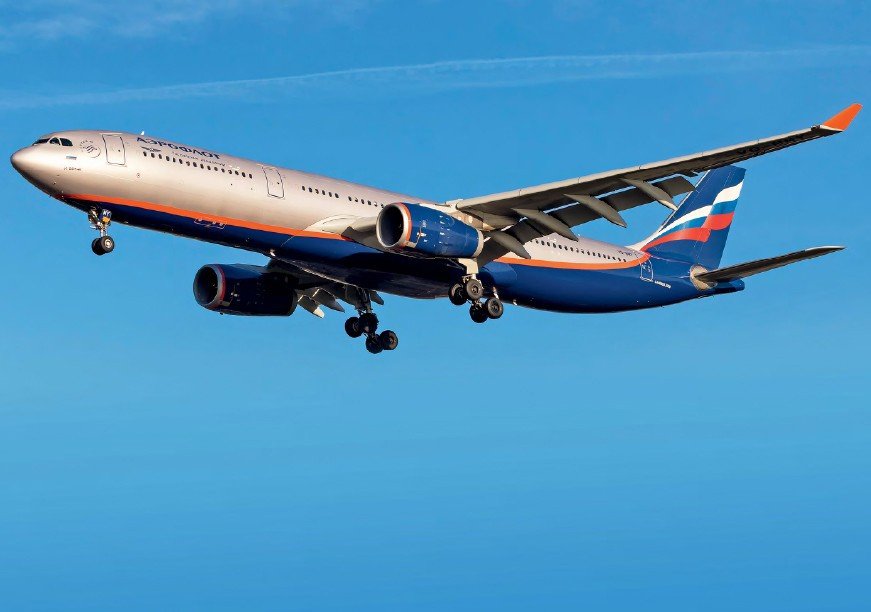 A mostly Western fleet is one reason why Aeroflot Russian Airlines has been able to improve its reputation. Airbus A330-343 VQ-BMY (msn 1301), pictured approaching London Heathrow, is one of 22 A330s in service with the carrier.
Daan van der Heijden/AirTeamImages

Aeroflot also benefits from the cheaper ruble, as other airlines pay fees for Siberian overflights in foreign currency. On the other hand, aircraft leasing fees and handling, air traffic control and other costs due abroad get more expensive. Overall, Aeroflot made RUB 15.6 billion in 2016 in net foreign exchange gains.

A contributing factor to this is a relatively high share of international traffic. Since most foreign passengers buy tickets in their home countries, they pay in their local currency, which when converted into Russian currency means more ruble-denominated revenue for Aeroflot. In 2016, 42% of the airline’s passengers were foreigners.

The popularity of Aeroflot among foreigners is a result of a combination of factors, the main one being the positioning of its hub and attractive prices offered by Aeroflot in both economy and business classes.

The proportion of passengers transferring in Aeroflot’s main hub at Moscow-Sheremetyevo Airport stood at around 42% in 2016, comprising 17% transferring between two domestic connections, 13% connecting between two international flights and 12% flying from Russia via Moscow to another country.

In 2016, nearly one in five of Aeroflot’s passengers flew to or from Asia.

Aeroflot told AIR International: “Thanks to good slots at the Asian airports and [a] welloptimised schedule, we offer connections between Europe and Asia that are around two hours shorter than at other hubs. We fly to 13 destinations in Asia as of now.”

The carrier has also been named as the best foreign air carrier in China, one of its key markets. Last year, the number of flights operated by Aeroflot Group to Asia increased by more than 20% and this number is poised for further growth.

Aeroflot enjoys the favourable location of its main hub, which is closer to Far East Asia than other hubs, such as Istanbul or those in the Gulf States. The airline also has an advantage over its rivals as it neither needs permissions nor has to pay fees for Siberian overflights. While the permits are issued by the Russian government rather than Aeroflot itself, the revenues from charges are passed to the airline.

In the medium-haul market, Aeroflot benefits from the re-emergence of Turkey and Egypt as travel destinations. Both key leisure markets were in steep decline due to a combination of political and security issues, but it seems these issues are now gone and Aeroflot will be able to further increase its leisure traffic to those destinations, which are popular among Russian tourists.

While the Ukrainian market remains closed to the airline, the loss of traffic is compensated by growing traffic to other countries. The ongoing tensions with Ukraine remain an operational challenge, as Aeroflot’s aircraft have to fly around Ukraine, which on some routes means significant detours.

The Aeroflot Group’s market share in terms of international traffic to and from Russia grew by more than ten percentage points to 39.4% in 2016.

One of the biggest challenges for Aeroflot in foreign markets remains its reputation.

Fleet replacement plays a large part in shedding this old image. Aeroflot stopped flying the Soviet-era Tupolev Tu-154 in 2010 and for a while had a fully Western-built fleet. This changed with the introduction of the modern Sukhoi Superjet 100 regional jet in 2011, which does not carry such negative connotations.

A spokesperson for the carrier said: “Aeroflot operates one of the youngest fleets among major carriers globally with an average fleet age [of] about 4.2 years. The almost 200-strong fleet comprises Boeing 777, Boeing 737, Airbus A330, Airbus A320- family [and] Sukhoi Superjet 100 aircraft.”

While the share of domestic-made aircraft is set to grow with the deliveries of further Superjets and new Irkut MC-21s, competitors to Boeing 737 and Airbus A320 jets, Aeroflot intends to keep the fleet age low. The group fully conforms to European and American safety standards. While the airline cancelled its order for 22 Boeing 787 Dreamliners in 2015, officially for fleet conformity rather than political reasons, the introduction into service of 28 Airbus A350-900s and an additional six Boeing 777-300ERs is scheduled by 2025.

While Aeroflot Russian Airlines is the Russian national carrier, the group consists of four brands, the others being: Rossiya, a hybrid, mid-market carrier operating scheduled and charter services primarily in the northwestern part of the country; Aurora, a carrier based in the Far East; and Pobeda, a low-cost brand.

This diversification has been another growth factor in recent years. Pobeda in particular has been expanding rapidly. In 2016, it carried 4.3 million passengers: still a mere 9.9% of the overall group’s traffic, but 38.7% more than in 2015. Despite having a moderately sized fleet of only 12 Boeing 737- 800s, the airline has become a very efficient organisation and utilises the aircraft for 14–15 hours per day.

Pobeda benefits from a political drive to promote domestic travel. While the Russian economy remains fragile and citizens’ purchasing power is low, the government actively supports domestic travel, including providing financial incentives. This, combined with Pobeda’s low prices, has led to a surge in traffic within Russia. Aeroflot says around 12% of Pobeda’s passengers are flying for the first time in their lives.

Rossiya is also set to benefit from the economic recovery in Russia, with more people travelling abroad for leisure. In turn, Aeroflot itself sees its main strength as being able to build a stronger hub. In 2017, the airline further increased its seat capacity by more than 15%, which ensures another year of double-digit growth.

While rising fuel prices and a slowly but steadily appreciating ruble will increase financial pressure on Aeroflot, the Russian group has proved in the last few years it has restructured itself into a modern, multi-brand airline group with a high level of comfort, a good record of safety and an ever bigger competitive edge on Europe-Asia routes. Unless the Russian economy faces a sudden crisis. Aeroflot is poised to stay among the top European carriers.