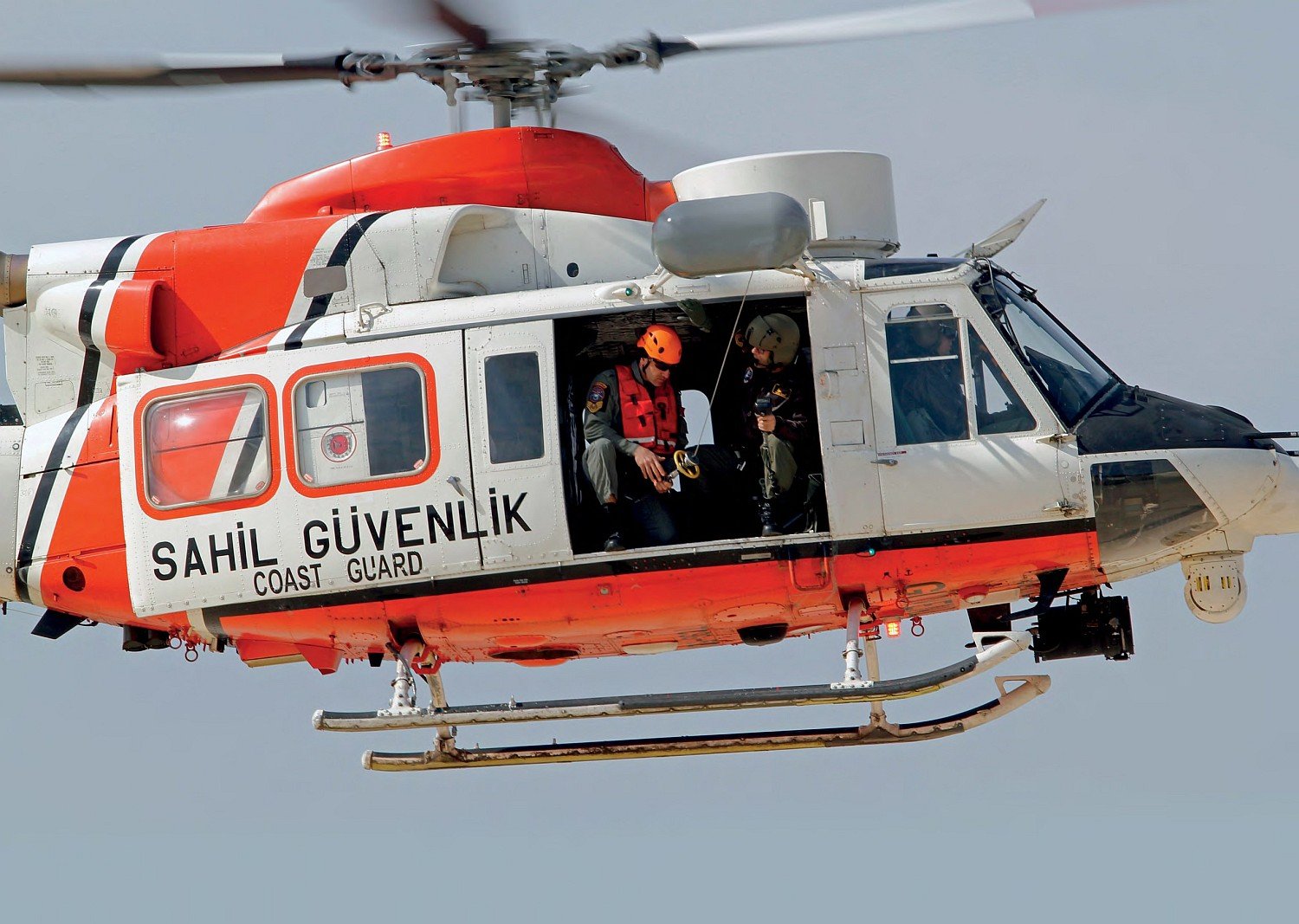 A search and rescue exercise involving an AB412EP. The Coast Guard Command Centre in Ankara is responsible for dispatching assets to perform a search and rescue operations.
All photos Carlo Kuit and Paul Kievit

Adnan Menderes International Airport at Izmir is the main hub for the aviation operations of the Sahil Güvenlik Komutanlığı (SGK, or Turkish Coast Guard). Opened in 2001, it is a training and maintenance facility and one of the four mission coordination centres alongside Ankara, Antalya and Samsun.

The SGK is a part of the Turkish Armed Forces and is responsible for controlling the maritime jurisdiction areas and coasts of Turkey and fighting all kinds of illegal activities. The Coast Guard is also the main search and rescue (SAR) coordination authority in the Turkish SAR zone.

During peace time, the SGK is under the command of the Turkish Interior Ministry. However, during emergency and war it will be part of the Türk Deniz Kuvvetleri (TDK, Turkish Navy). The Coast Guard is organised into four area commands: Black Sea, the Sea of Marmara and Adjacent Straits, the Aegean Sea, and the Mediterranean Sea. It has a total of around 5,500 personnel. 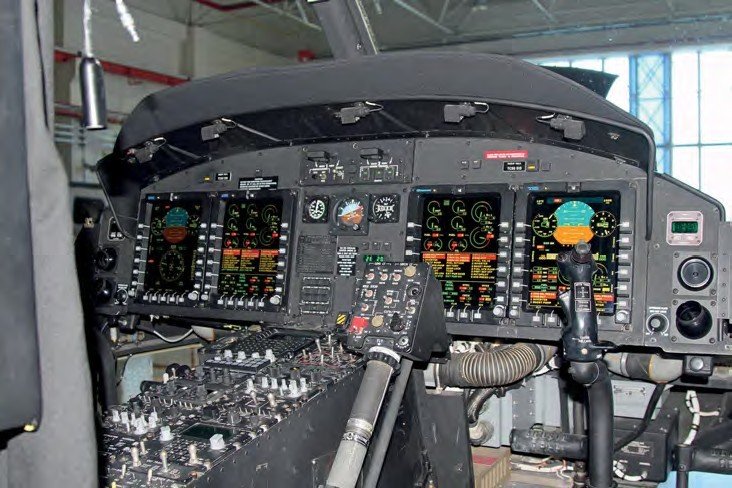 Due to changes in the international security environment in the 1960s, Turkey’s geostrategic location, the length of its coasts and being a maritime nation, it became clear Turkey needed a new and more professional Coast Guard Command. Consequently, the Coast Guard Command Law was adopted on July 9, 1982, and the Turkish Coast Guard Command was created, beginning operations on September 1, 1982.

Commander Murat Oglakci, responsible for the operations with the AB412EP/SAR helicopters located at Izmir-Adnan Menderes International Airport on the Aegean coastline, explained: “The Coast Guard controls areas from Hopa to Igneada, Marmara Denizi and the area from Enez to Cevlik. This is basically the whole part of the Turkish search and rescue region.” 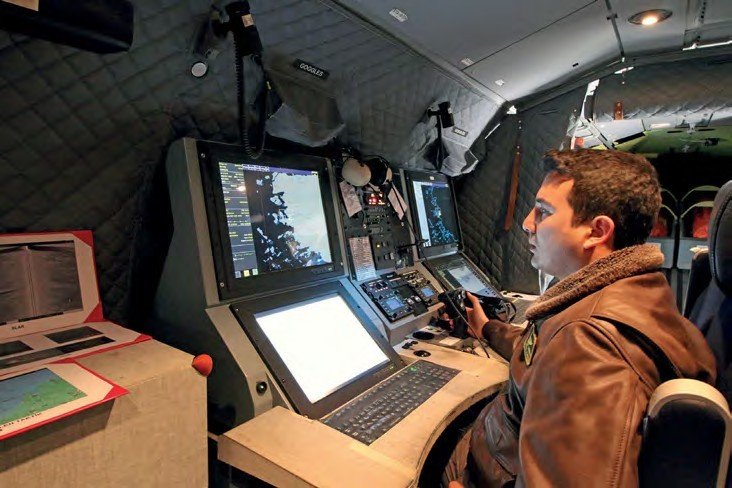 The crew of a CN235MSA consists of two pilots, two observers, two operators and a flight technician. The operators have a wide array of systems available including the ASELFLIR 200, side-looking airborne radar and Ocean Master 400 radar. 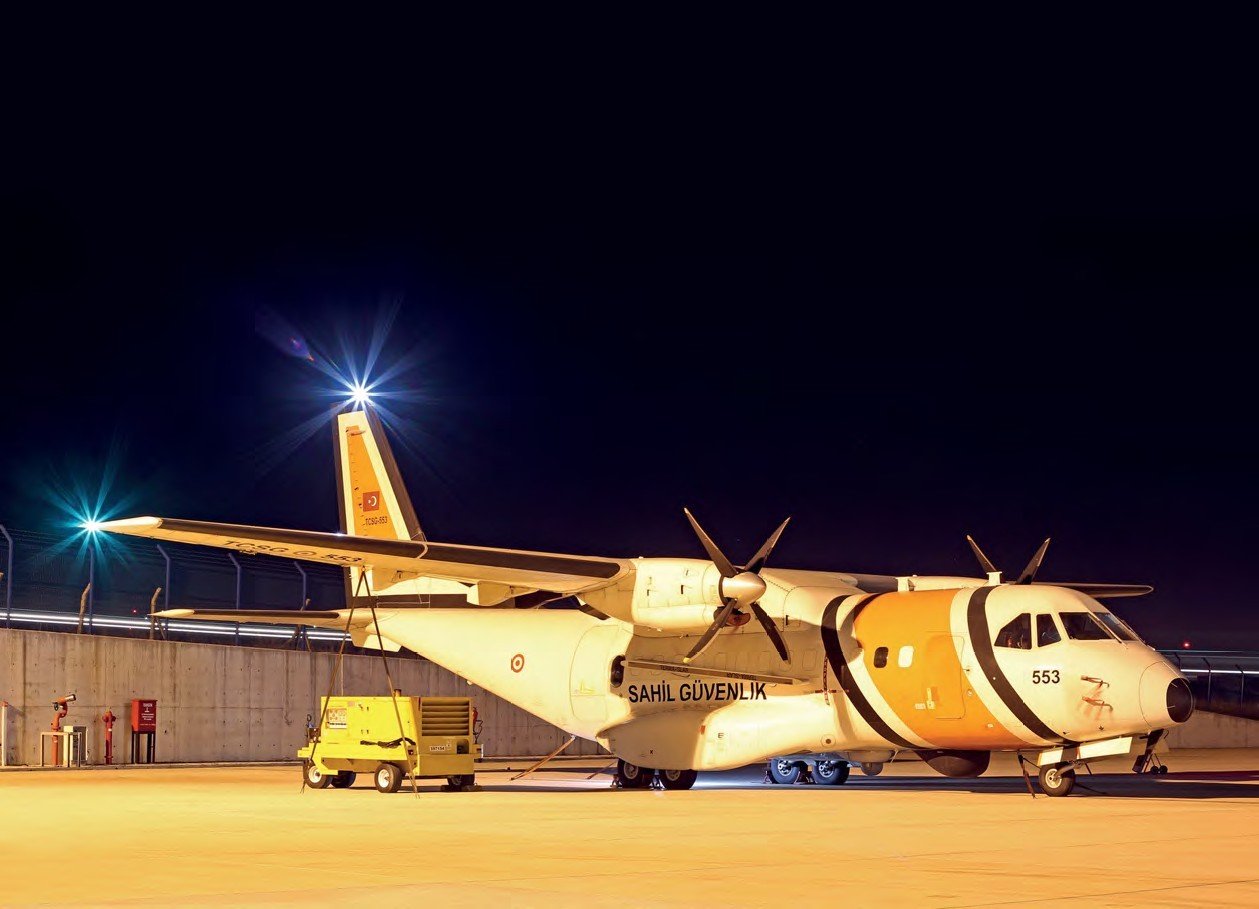 The MELTEM II programme has seen Thales modify the three SGK CN235MSAs for exclusive economic zone surveillance missions as part of the most complex and prestigious project for the Turkish Coast Guard to date.

The history of the Turkish Coast Guard Air Command dates back to November 1992, when it was established at Topel Naval Air Station east of Istanbul. Its first aircraft were three AB206s and one Moulin MX-7. During July 1996, this MX-7 was withdrawn from use and the AB206s were removed from service in December 1998.

An Agusta A109 was added to the inventory in 1999; it saw service until 2005 and is now preserved at the Izmir Coast Guard Air Station. In December 1999, a major relocation and modernisation process began, then during 2001 new facilities were opened at Adnan Menderes International Airport in Izmir. This process included the procurement of new Agusta AB412EPs. Later, three new CN235MSA maritime surveillance aircraft were delivered as part of the MELTEM programme, the most ambitious maritime surveillance and patrol programme conducted in Europe over the last decade.

A multimission helicopter project has started for the selection of a new helicopter type to improve Coast Guard missions by procuring helicopters that have longer endurance and capacity than the AB412EP. Cdr Oglakci said: “We need a heavier type of helicopter to conduct our missions more effectively.” A decision is pending, with no fixed timelines set.

Currently, the backbone of the SGK Air Command is the AB412EP, of which 14 are in use divided across Coast Guard stations Izmir, Antalya, Samsun and Istanbul. There are heliports available on demand at Mersin and Amasra. Cdr Oglakci said: “It is expected within two to three years a dedicated location will be built for the Coast Guard in the Istanbul area.”

The first two contracts (MARTI 1 and MARTI 2) for the initial delivery of the AB412EPs were signed during March 1998. In the same year, one additional contract was signed with Turkish companies Aselsan and Netas for the domestic production of the ASELFLIR 200 forward-looking infrared system, identification friend/foe, radio equipment and video and digital cameras. The other contracts (MARTI 3 and MARTI 4) were signed in December 2004. The first two AB412EPs were delivered during June 2002.

Lieutenant Junior Grade Electronic Engineer Baris Dündar at Izmir Coast Guard station explained: “The AB412EPs [locally designated AB412SAR] are equipped with a number of modifications to allow for over-sea operations. A glass cockpit with four displays, auto hover function, more powerful engines, full authority digital engine control system, night vision capabilities and cameras in both the hoist and cabin, which allows crew and pilots to oversee the rescue operations, have been installed. Furthermore, an ADELT [Automatically Deployable Emergency Locator Transmitter] has been installed recently to identify the potential crash area of an AB412.” 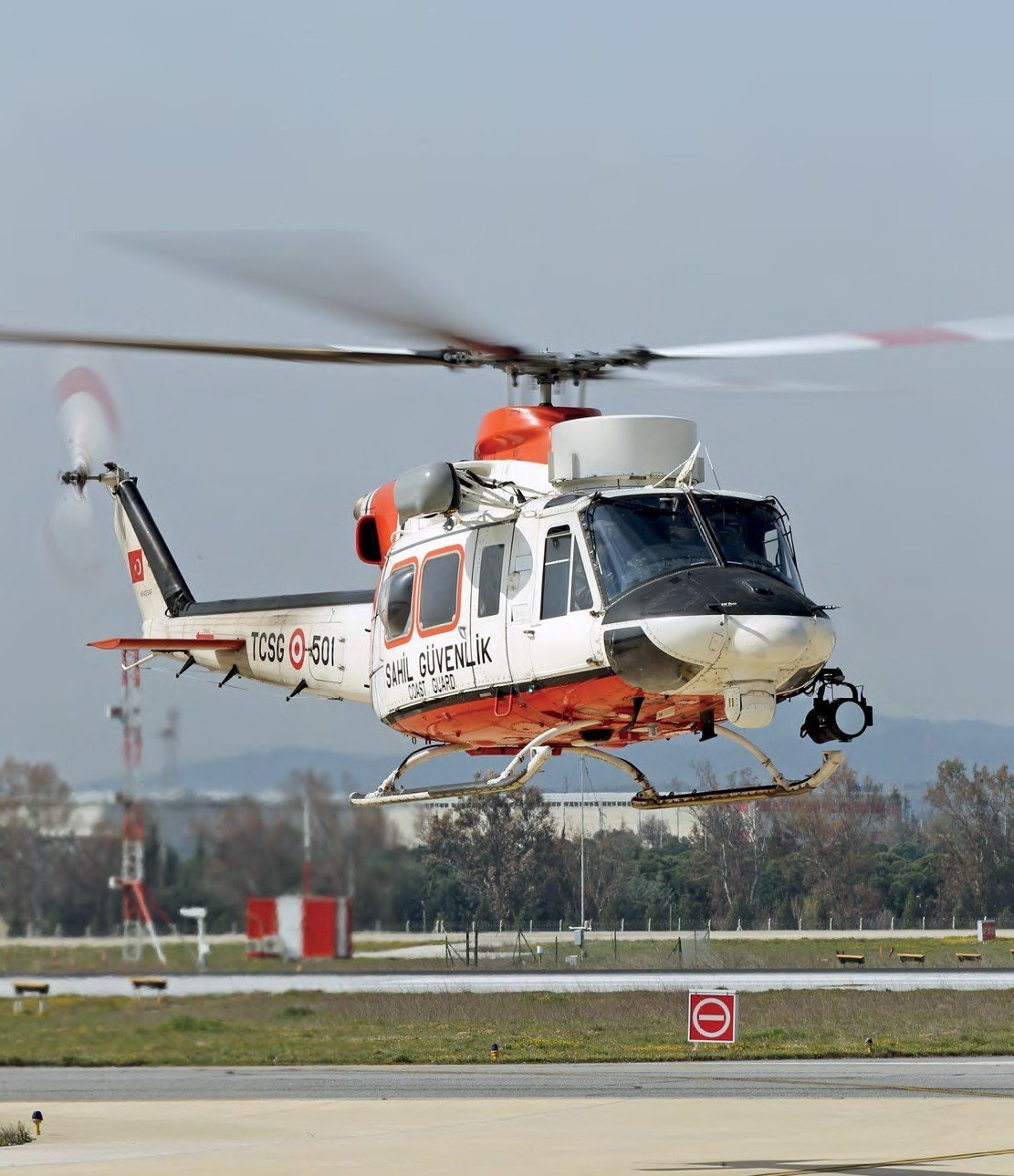 According to Bell, the AB412EP’s expansive cabin provides multi-mission flexibility, and its 7ft 8in wide doors easily accommodate forklift loadings into a spacious 220ft3 cabin.

Other tasks undertaken by the SGK’s aircraft in addition to SAR are anti-terrorist operations, pollution control, border control and homeland security.

New Coast Guard pilots receive their initial pilot training at the Army Aviation training school located at Army Air Base Güvercinlik near Ankara. One of the new junior Coast Guard pilots, Hakan Kuru, who transferred just six months before AIR International’s visit, said: “We have been following the same training path as the army students. We train for 51 weeks with 100 hours of flying on the AB206 and about 80 hours on the UH-1H.”

After graduation, the new junior pilots join the training squadron at Izmir. Cdr Oglakci explained: “The transfer to operate with the AB412EP will take around six months. The first phase of the transfer is visual flight rules flying, which concludes with a formal check ride. The next phase will be instrument flying and operating with night vision goggles. In total, the students fly around 50 hours to complete the conversion.”

Following conversion, the new pilots operate as co-pilots for a period of two to three years. When they pass a formal check ride the pilot can be graduated to 3rd grade pilot. To become a 1st grade pilot takes a minimum 1,000 flying hours. Cdr Oglakci said: “The basic flying compared with the UH- 1H does not differ a lot, but the new pilots will have to learn to utilise the glass cockpits, all mission equipment we use on our daily operations and learn laws.” The pilots will not be involved in real-life rescue operations until they have completed their, transition period. Each year, between three and seven new pilots are added to the Coast Guard. 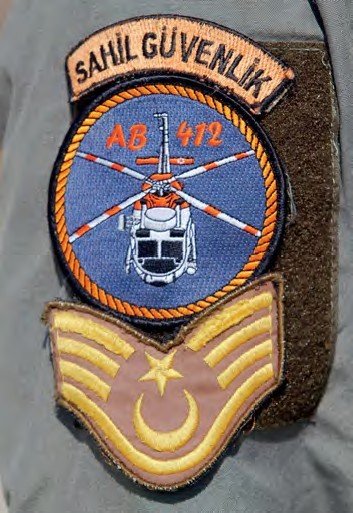 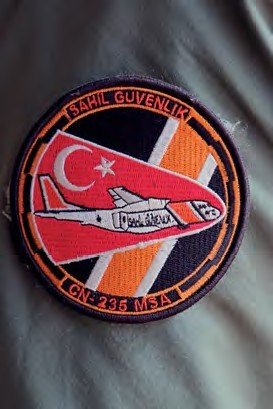 Izmir Coast Guard Station is the main maintenance hub for SGK Air Command. Lt Dündar said: “After each 100 flying hours we have an extensive check of the AB412s. We can perform all periodic inspections here at Izmir. We have all facilities and knowledge. After 2,500 hours the helicopters’ dynamic components are sent to the Army’s 5th Main Maintenance Centre for depot level controls and/or overhaul.”

An important skill for all Coast Guard aviators is the ability to perform night flying operations. The ASELFLIR 200, developed locally by Aselsan, records all images in flight. The camera can turn 360°. The operator and crew can follow on screens the imagery from the pilots’ screens to get full situational awareness. Each Coast Guard pilot has a personal night vision goggle set. The effective range for rescue operations for the AB412EP is about 90 nautical miles (166km) with a wind limit of 35kts, which allows 15–20 minutes on scene. In case of emergency, the response time is 30–90 minutes for both day and night operations across Turkey. 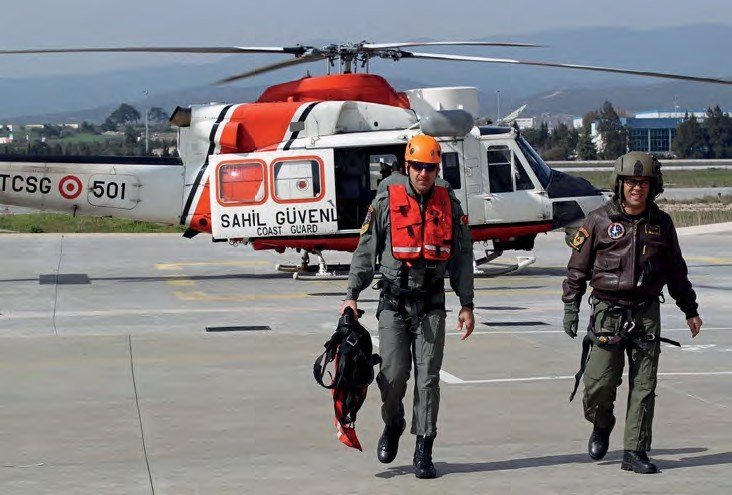 Each student and pilot has to be able to operate during day and night time hours, and the SGK is tasked to respond to an emergency within 30-90 minutes.

The Coast Guard Command Centre in Ankara is responsible for despatching assets to perform SAR operations. Currently, the SGK is heavily involved in the rescue and tracking of illegal immigrants who are trying to get out of Turkey, as the Aegean Sea and the Mediterranean Sea is an often-used route. Other tasks performed are SAR, anti-terrorist operations, pollution control, border control and homeland security. 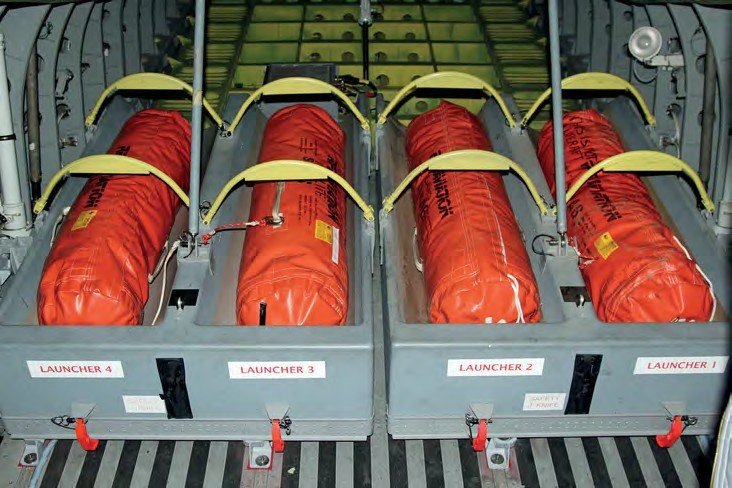 To support SAR tasks smoke markers and Aerolite 6 life rafts, pictured, have been installed in the CN235MSAs. The aircraft is able to deploy life rafts for about 100 people in one drop.

The Turkish Coast Guard started to operate the CN235MSA fixed-wing aircraft in 2013. Procurement and development of this aircraft dates back to 1998 when the initial contracts were signed. The first two aircraft (TCSG-551 and TCSG-552) were delivered in 2001 and the third (TCSG-553) in January 2003 as part of MELTEM I. The TDK ordered six CN235s as part of the same order. For MELTEM II, which started in September 2002, Thales modified the three CN235MSAs used by the SGK for exclusive economic zone surveillance missions and the six CN235s in anti-surface and anti-submarine warfare configuration operated by the TDK. Aselsan, as subcontractor, was awarded the contract to develop a tactical command system, tactical command and control information system, ground control station (including an education system), system integration test bench and mission systems. The MSA version is now equipped with a ASELFLIR 200, Ocean Master 400 radar, a side-looking airborne radar (SLAR), Thales’ AMASCOS (Airborne Maritime Situation and Control System), and video and digital cameras.

To support SAR tasks, smoke markers (Mk25 mod 2) and Aerolite 6 life rafts have been installed. One of the CN235 pilots said: “The CN235MSA is able to deploy life rafts for about 100 persons in one drop.” The crew of the MSA consists of two pilots, two observers, two operators and one flight technician. The radar has a range of 200 nautical miles (370km) and is able to track 200 contacts simultaneously. The ASELFLIR 200 has a range of 20 nautical miles (37km). When operating at 15,000ft (4,572m) the SLAR can detect sea pollution from the same distance away. A newly installed scanner can detect sea pollution through infrared and ultraviolet radiation.

Pilots have to fly about 15 missions to adapt to the MSA version, according to one of its former pilots, who said: “We had representatives from Thales for two years at Izmir who are former French Navy pilots to teach us how to operate the MSA. We are very satisfied with the new aircraft. We are now able to detect many more pollution incidents.”

On average, pilots fly around 175 hours a year, mainly focusing on training. A crew member said: “The amount of flying hours increases each year due to the demand. Currently, we are focusing on training our sensos [sensor operators]. As we had to start from almost scratch with the new MSA aircraft, we are also developing documentation and building our unit. We have 75% of our pilots operational, with focus on operators now. We are very interested [in cooperating] with other countries as we feel there is much to learn for us. However, we are still in training mode.”

The first SGK CN235MSA under MELTEM II was test flown in December 2012, followed by a formal acceptance ceremony held at Turkish Aerospace Industries facilities on January 28, 2013. The CN235 gives the Coast Guard aircraft additional capabilities and a wider reach of operating areas and allows for new missions to support the Turkish Coast Guard. 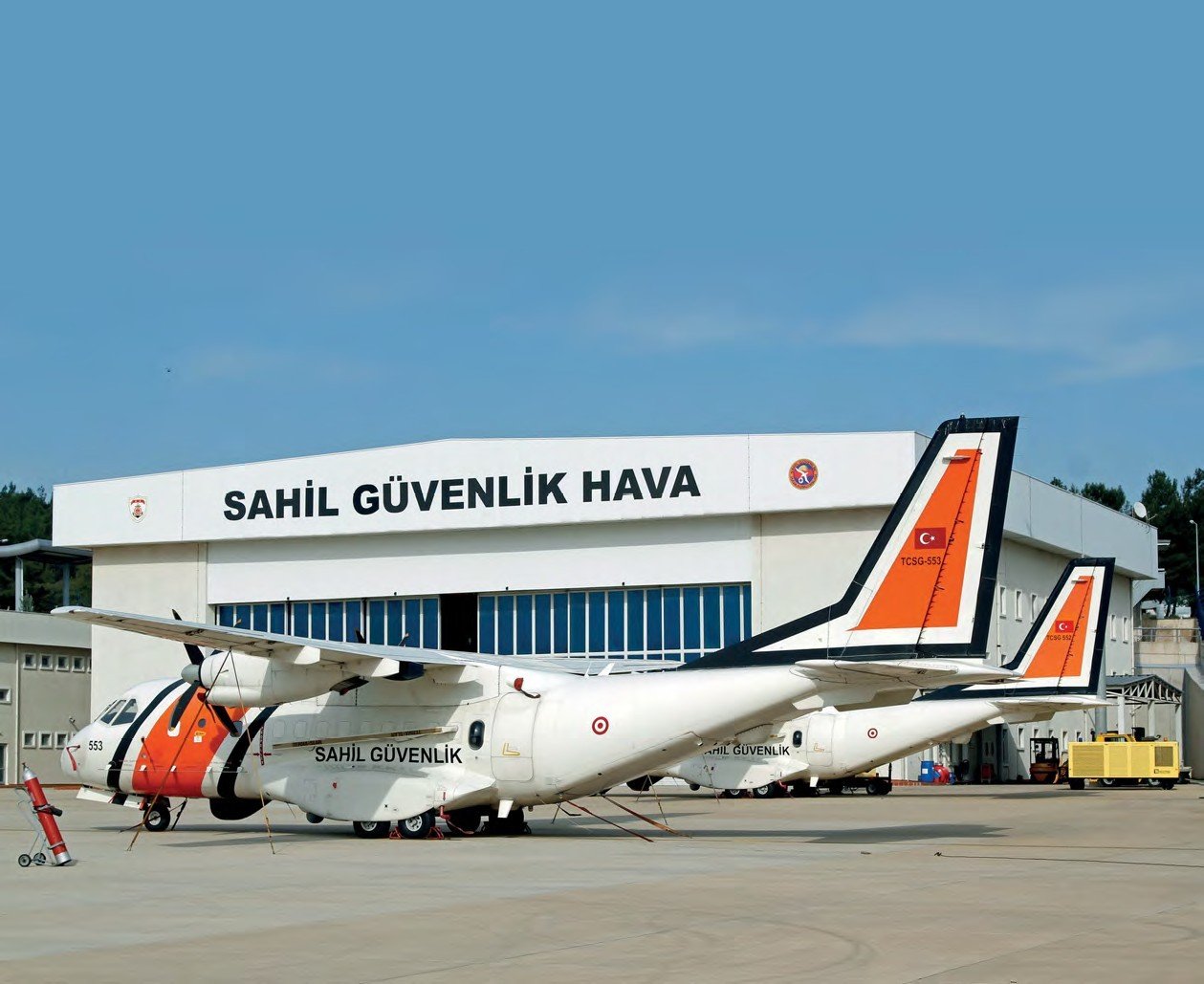 Two of the three CN235MSAs delivered to the SGK in the early 2000s, which have been extensively upgraded with new equipment under the MELTEM II programme.