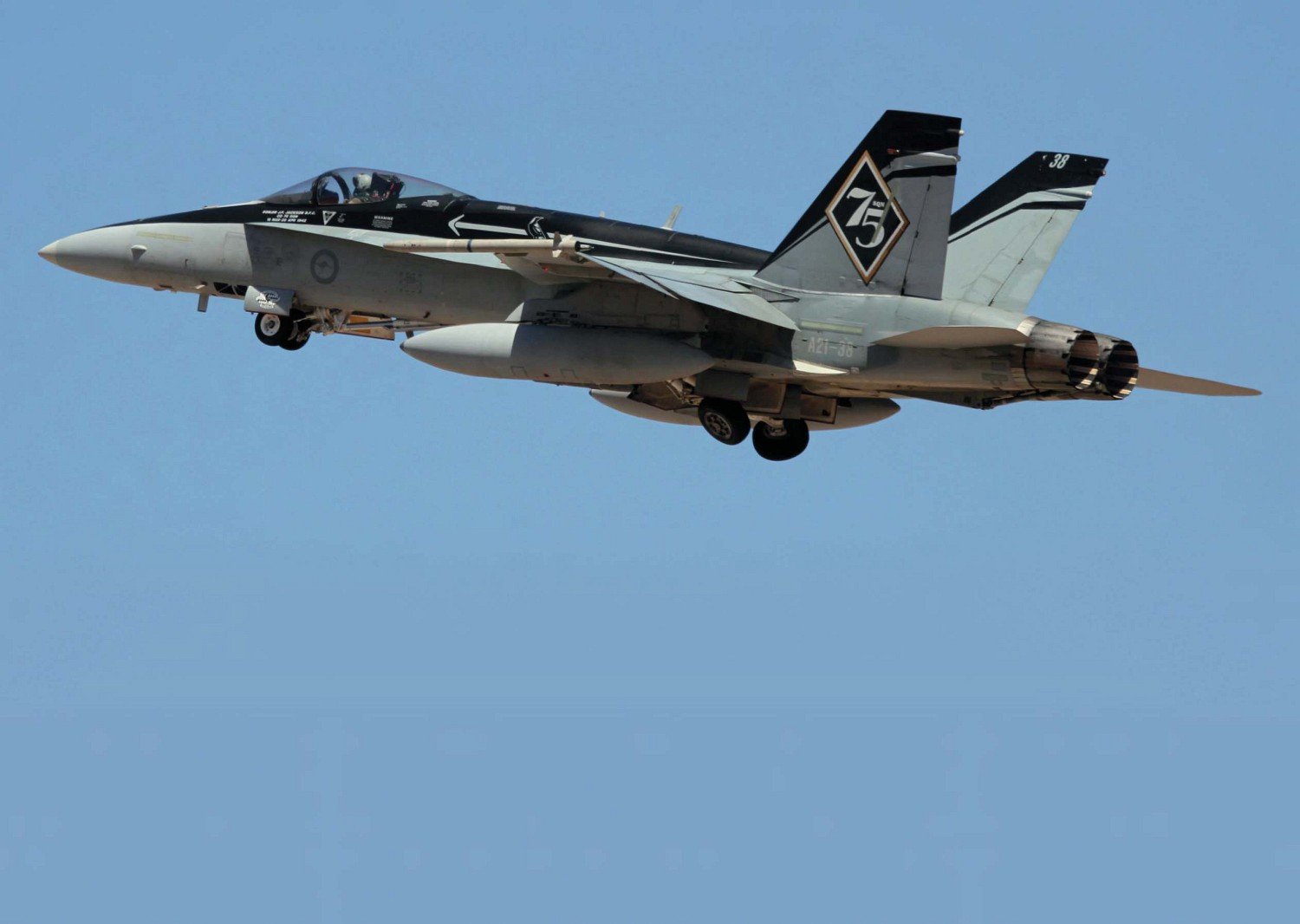 F/A-18A Hornet A21-38 is painted in a black and silver paint scheme to commemorate the 75th anniversary of the Royal Australian Air Force’s 75 Squadron based at Tindal in the Northern Territory.
All images Nigel Pittaway

While Pitch Black 2018 does not mark the end of the Hornet in Australian service, it certainly marks the beginning of the end for the capable fighter aircraft, which has served the Royal Australian Air Force well since 1985.

At its peak, the Royal Australian Air Force had three operational Hornet fighter squadrons, plus an operational conversion unit, but the first of these has already re-formed as the initial operational F-35A squadron. In addition, 25 surplus F/A-18As have recently been sold to the Royal Canadian Air Force, with the first deliveries in February 2019.

Hornet numbers will continue to dwindle as further F-35 deliveries occur and other squadrons transition to the new fifthgeneration fighter and, at the time of writing, the planned withdrawal date (PWD) for will occur at the end of 2022.

The F-35 is likely to play a peripheral role in the next Pitch Black exercise in 2020, coincident with what will possibly be the Hornet’s last appearance at Australia’s largest air defence training event.

Australia selected the F/A-18A/B Hornet as its new fighter in October 1981, to replace the Dassault Mirage III, which had been in service since the mid-1960s.

As with the Mirage, the Hornets were largely assembled in Australia by the Government Aircraft Factories at Avalon Airport, south of Melbourne. The initial pair (F/A-18Bs A21-101 & 102) where completed by McDonnell Douglas in St Louis and flown to Australia by Royal Australian Air Force pilots in November 1984. The second pair (A21-103 and 104) had been delivered in knocked-down form aboard a US Air Force C-5 Galaxy transport in June 1984 and subsequent aircraft featured an increasing amount of Australian content, until the final aircraft (A21-57) was handed over in a ceremony at Avalon in May 1990.

The Royal Australian Air Force’s Hornet fleet was widely regarded as the most capable fighter force in the Asia Pacific region (other than deployed US forces) when it entered service, but by the mid-1990s it was clear that the introduction of modern aircraft such as the MiG-29 and Su-27 had eroded the advantage and an upgrade or replacement programme would be needed.

Although consideration was initially given to replacing the Hornet with the thencurrent Block 1 version of the F/A-18 Super Hornet, in 1999 it was decided to embark on a comprehensive and incremental Hornet Upgrade Programme (HUG) under Project Air 5376.

The HUG was divided into three major phases, the first of which defined the scope and architecture of the upgrades to be delivered. The second phase covered incremental capability upgrades, which included replacement of the existing radar and addition of the Joint Helmet-Mounted Cueing System and the MBDA Advanced Short-Range Air-to-Air Missile to replace the ubiquitous AIM-9M Sidewinder. Other avionics upgrades were included, together with enhanced countermeasures systems and the Northrop Grumman AAQ-28 Litening targeting pod.

The final phase was a series of relatively minor structural upgrades designed to ensure the Hornet would meet its PWD, then anticipated in the 2015 timeframe. In the event, delays to the introduction of the F-35, meant that ten aircraft also underwent a major structural fuselage centre barrel replacement programme, performed by L3 Mirabel in Canada between 2006 and 2010.

Australian Hornets were first deployed operationally in November 2001, when four 77 Squadron aircraft were flown to Diego Garcia in response to the US Administration’s ‘War on Terror’, but because the entire fleet was pre-HUG configuration it was decided to withhold them from actual combat operations in the Middle East.

In 2003, the Royal Australian Air Force deployed combat jets to an operational theatre for the first time since the Vietnam War, when 14 75 Squadron jets were sent to the Middle East under Operation Bastille. The aircraft had all completed the first increment of the HUG upgrade and were equipped with the APG-73 radar and a contemporary identification friend or foe system. During Bastille, Royal Australian Air Force Hornets flew 168 combat missions and more than 3,000 hours over Iraq, also becoming the first Australian fighter aircraft to conduct offensive combat operations since the Korean War.

Most recently, a rotational Hornet force returned to the Middle East under Operation Okra and conducted air strikes in Iraq and Syria, in support of coalition forces fighting ISIS extremists. The six-aircraft deployment ran between April 2015 and May 2017 and manned by personnel from each of the three operational fighter squadrons in turn, beginning with 75 Squadron. During Okra, the classic Hornets flew almost 2,000 missions and 15,000 flying hours with an availability as high as 98%, a figure that rivalled the more modern Super Hornet.

F/A-18A Hornets assigned to 77 Squadron based at Williamtown in New South Wales with the unit’s original tail markings.

Although it is now in the twilight of its career with the Royal Australian Air Force, the classic Hornet is still a very capable fighter and, according to its pilots, it can still hold its own against other fourth-generation aircraft.

Royal Australian Air Force Hornets are regular participants in regional exercises, including the Bersama series, Five Power Defence Arrangement held in Malaysia, the multilateral Cope North hosted by the US Air Force in Guam, and they are regular visitors to the Red Flag series of high-end air combat exercises in the United States.

Opposing them as Red air on most missions were a similar number of aircraft from 75 Squadron at Tindal, together with ten F/A-18Ds from the US Marine Corps’ VMFA(AW)-242 ‘Bats’, which had deployed from Japan. However, to ensure the training value was maximised for everyone during the exercise most, if not all, participants occasionally switched roles.

The Red air role traditionally falls to 75 Squadron, due to the fact it is based at Tindal, south of the attacking Blue air assets, which are largely based in Darwin.

”We are flying the F/A-18As out of Tindal and they are performing exceptionally well. Their avionics suite is probably the most advanced of any classic Hornet in the world.” Commanding Officer 75 Squadron, Wing Commander Mick Grant

The Royal Australian Air Force’s most forward-deployed squadron, 75 Squadron has 16 Hornets on strength and a normal flying day will comprise of about 20 lines of flying, in a ten-turn-ten arrangement and, as Commanding Officer, Wing Commander Mick Grant explained during the exercise, a similar tempo was established for Pitch Black.

He said: “I run Australia’s ‘Top End’ fighter squadron here at Tindal. Pitch Black is going exceptionally well. There are upwards of 80 jets in the airspace at any one time, so the airspace is busy, but it has been quite successful and the interoperability between nations is working well.

“We are flying the F/A-18As out of Tindal and they are performing exceptionally well. Their avionics suite is probably the most advanced of any classic Hornet in the world.

We’re seeing some good outcomes and getting some good results, both in Red Air and in Blue Air activities that we’re performing in the airspace at the moment.”

Paying tribute to both the Hornet itself and the high standard of training Royal Australian Air Force fighter pilots receive, Wg Cdr Grant said the jet will remain relevant until such time it is replaced by the F-35A.

He explained: “The Australian F/A-18s are absolutely holding their own in the airspace at the moment. Last week we did some BFM [basic fighter manoeuvring], or dogfighting, against some of the other platforms that are here. That’s the beauty of having a large international engagement exercise where we do get to show off our capabilities and we see the capabilities of other partners.

That was quite enjoyable, certainly from the perspective of some of our young aircrew who may never have fought against a different aeroplane type, and the Australians are doing very well.

Although Australia’s Hornets remain capable today, the oldest aircraft is now approaching its 35th anniversary in service and the fleet is becoming increasingly more expensive to support and sustain. Coupled with the introduction into the region of the latest fourth-generation fighters – such as the F-15 Strike Eagle, Dassault Rafale, Saab Gripen and Sukhoi Su-30 –and the fifth-generation aspirations of countries such as China, Japan, Russia and South Korea, this exponentially increasing cost of ownership means the Royal Australian Air Force is now keen to retire the aircraft from service.

The Royal Australian Air Force is acquiring 72 F-35As as a replacement for the Hornet and next decade it will decide whether to replace its Super Hornets with a further 28 Lightnings. However, the fifth-generation fighter will not achieve the IOC milestone until the end of 2021, so the classic fleet will be maintained as a viable capability until at least that time.

As noted earlier, the first of the Hornet squadrons to relinquish its aircraft was 3 Squadron, which received its first two F-35As in the United States in September and October 2018 and will be the first to stand up at Williamtown at the end of 2020. By that time, F-35 operational conversion currently conducted in the United States will have transitioned to Australia and 2 OCU will also have retired its Hornets. The next operational unit to make the transition will be 77 Squadron at Williamtown, which is due to occur in 2022, and then, finally, 75 Squadron at Tindal during 2023.

Although the actual date Hornet flying will cease is yet to be announced, it will likely be around the end of 2022, as 75 Squadron stands down in anticipation of the F-35, so Exercise Pitch Black 2020 appears to be the F/A-18A’s swansong.

Speaking at Pitch Black 2018, the Officer Commanding the exercise, Air Vice Marshal Mike Kitcher, said: “The classic Hornet will certainly be involved in Pitch Black 2020 [but] that may very well be their last one …

The first F-35s will arrive at Williamtown in December and they may participate in a very small way in PB20, but they will definitely be participating in PB22.”

In the meantime, it is a testament to both the Hornet aircraft itself and the quality of its aircrews and maintainers that only four aircraft have been lost in Royal Australian Air Force service to date, after over 30 years of service. AI