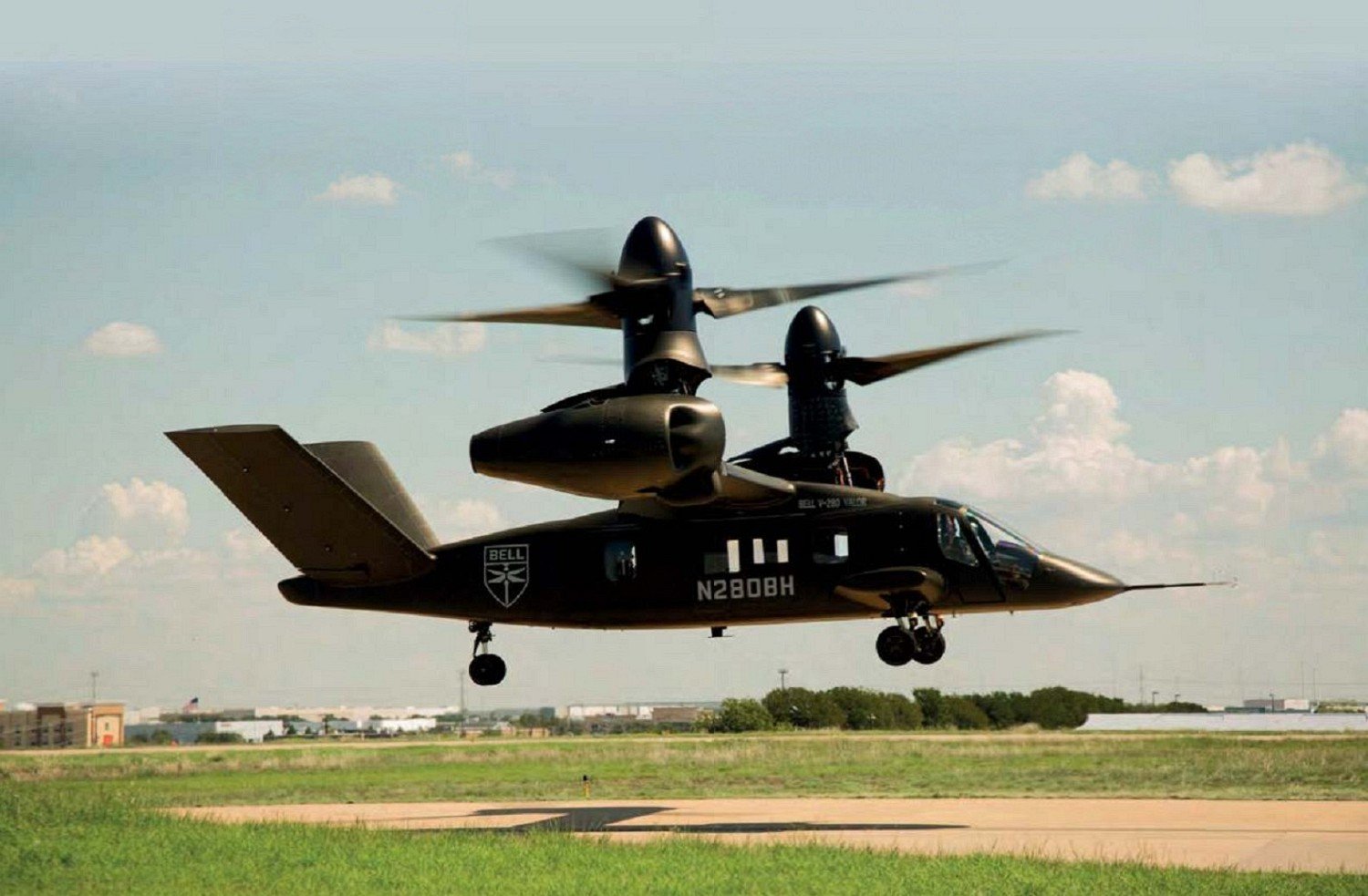 The Bell V-280 Valor tilt rotor is currently being flight-tested under the JMR TD programme.
All images Bell

“However this shakes out, this is the future of rotorcraft we are talking about”, said Kevin Magnum, Lockheed Martin’s vice president for US Army programmes, at a presentation in Washington on October 4.

The first of the five FVL programme capability sets to start development is the Future Attack Reconnaissance Aircraft or FARA, which represents FVL Capability Set 1. The Army issued an announcement on October 3, calling for FARA proposals to be submitted by December. In June 2019, four to six teams (all to be led by US industry) will be selected to submit design studies. Sikorsky is putting together an industry team behind its S-97 Raider compound helicopter, other industry leaders have not said whether they will participate.

Despite high-technology air defence systems, the FARA will be able to “dominate a window or a corridor and exploit that”, according to Brigadier General Walter Rugen, director of the FVL Cross-Functional Team (CFT), speaking in Washington on October 10. While the Army has not issued requirements for the FARA, speaking in Washington on October 4, Bell’s V-280 Valor programme manager, Ryan Ehinger said: “The Army is looking for open systems architecture, speed – which is critical – range and stand-off. As the capability of IADS [integrated air defence systems] advance, we need to advance the capability of onboard systems. We need to have a backbone, an architecture, for spiral upgrades; it’s not just the airframe, it’s the mission equipment”.

Representing FVL Capability Set 3 (Medium), the Future Long Range Assault Aircraft or FLRAA is a replacement for the Sikorsky UH-60 Black Hawk. Once the Army’s FLRAA analysis of alternatives (AoA) study is completed next year, work on the programme is set to start. The Army has said the FARA programme will not delay development of the FLRAA, which has been previously reported as the FVL’s top priority.

The Army is already determined that the FLRAA will be designed as an open-architecture mission system, able to incorporate upgrades from multiple sources and will be the next step from the FARA’s open architecture backbone.

Technology for the FLRAA is being demonstrated by two Joint Multirole Rotorcraft Technology Development (JMR TD) aircraft; the Bell V-280 Valor tilt rotor (currently flying) and the Sikorsky-Boeing SB>1 Defiant compound helicopter, which is yet to fly. Rotor blades were attached to the first Defiant prototype for ground testing in the first week of October with the start of flight testing expected in December 2018.

The Army is already incorporating inputs from Valor flight-testing and Defiant ground-testing in its FVL decision-making process. The Army, Rugen said, will “fully leverage the JMR effort, both on advanced rotorcraft [technology] and the open architecture side.”

Unmanned teammates for FARA and FLRAA is the objective of the Army’s Advanced UAS solicitation to industry, issued on September 28. The big requirement of the solicitation is to develop two non-developmental, runway independent UAVs. One in the Group 2 class (weighing between 22 and 55lb/10 and 25kg) and one in the Group 3 class (weighing under 1,320lb/600kg). Both must be able to perform better in austere conditions than the current Textron RQ-7 Shadow UAV and carry out manned-unmanned teaming (MUMT). The Army will procure six off -the-shelf air vehicles each from three industry teams and send two of each to three Brigade Combat Teams for evaluation.

Production orders will be decided before the end of 2019. Brigadier General Thomas Todd, the Army’s programme executive officer for Aviation, said in Washington on October 10 that the new system will not necessarily be a replacement for Shadow, but it could be. The Army wants unmanned aerial systems that are “heterogeneous – not just one – purpose built, typically runway independent”, Rugen said.

The FVL programme remains one of the Army’s top six modernization programmes. Yet the Army needs to keep its current helicopters operational until 2050-2060, which require multiple upgrades. Identifying and implementing solutions to such problems and to develop FARA and FLRAA quicker and cheaper, have driven the Army to establish a new organization called Army Futures Command, which includes the FVL CFT, and is led by a four-star general.

The Army has not created a new four-star command since its early 1970s recovery from the Vietnam war. With headquarters in Austin, Texas – to access the innovation that characterizes private-sector business there – Army Futures Command was created in less than a year through the joint efforts of Army Chief of Staff, General Mark Milley and the late Senator John McCain.

Futures Command does not replace existing Army research and development or programme management organizations. It will help them innovate and – perhaps most importantly – restore confidence from the Department of Defense, the Congress and industry that high-dollar programmes such as FARA and FLRAA will be not be expensive failures as in the past.

Speaking in Washington on October 10, the Army’s programme executive officer for Aviation, Brigadier General Thomas Todd said: “I believe we have fantastic teammates with the CFT…No matter what Wally [Rugen] asks us to do, we have to finish it of.”

The Army is considering using the new Section 804 rapid prototyping authority, granted by Congress, to reduce time and cost for FARA and FLRAA. But Section 804 by itself is not an answer. Repeated failures – especially in Army rotorcraft – have led to service cultures that are risk-averse.

The Army is paying attention to the affordability of FARA and FLRAA (which may clash with building-in survivability for high threat environments). FARA unit cost is projected as $30 million in current-year dollars over a 500-aircraft production run. Todd said: “At the scale the Army has to buy to, we can’t afford elegant expensive solutions. We think about affordability. We can’t afford to launch out on things that can’t be produced reliably”.

The Army is looking to industry for solutions. “We’re ready to see what you’ve got”, said Todd. He wants designs capable of extended maintenance-free periods.

Autonomous and optionally manned capabilities are goals, although it is uncertain whether they will be included in the initial designs.

Will industry invest independent research and development funding despite the risk that it may all turn to smoke if the Army cancels the programme? Speaking in Washington on October 4, Boeing’s director of FVL programmes, Randolph Rottee said: “Industry will have to provide technology that is applicable: autonomy, data analytics, digital, virtual reviews of design, manufacturing technology, all developed in recent years. Now they are more mature and can be applied.”

Looking at the FARA announcement, Lockheed Martin’s Kevin Magnum said: “We can deliver this within the cost box the Army has set out.”

How do you pay for all this?

Speaking in Washington on September 18, Deputy Secretary of Defense Patrick Shanahan said: “Today, modernization means retooling for great power competition.” Rugen said: “It’s about overmatch. We have to build that overmatch by 2028.” The Army wants to achieve this by investing more in its six-pack of top modernization priorities and less in updating systems.

During a briefing in Washington on October 9, Army Vice Chief of Staff, Gen James McConville said: “As the new system comes in, we’ll stop modernizing the old system, we’ll begin to divest that as we go forward.” That means 800-plus aircraft programmes are subject to being cut back or cancelled to enable resources to be reallocated to the top priorities – some $25 billion over five years – including enabling FLRAA to follow FARA’s development by two (or a few) years.

Speaking in Washington on October 8, Secretary of the Army, Mark Esper said: “We have been going through programmes and activities, looked at each one, and asked if this is more important. … Reductions, cancellations and consolidations will result. Where you put your money says a lot about your priorities.”

Topping the list of potential bill-payers has been the Boeing CH-47 Chinook Block 2 upgrade programme. Talk of a five-year delay in the Block 2 IOC – to 2030 – comes at a bad time for Boeing, potentially increasing unit costs while it is trying to close highly competitive export deals to Germany and Israel. Todd, however, asked, “Should a particular airframe be what your grandson is flying? It’s unfair to say your airframe should stick around to infinity. Of course, the enemy gets a vote.”

Rugen said of the decision to go forward with FARA and FLRAA together, alongside Advanced UAS, “we are at a great inflection point for Army Aviation. We can’t afford not to pursue both for our future force. We have a wonderful, modernized force across all out fleets now.

… The business case is quite compelling to jump to the future by pursing both [FVL] capability sets near simultaneously”. The decisions the Army makes, Kevin Magnum said, “will be game-changing for war fighters and the commercial market as well”.