After the financial and volcanic ash crises, Icelandair is experiencing a boom thanks to efficient transatlantic links and Iceland’s popularity, reports Andreas Spaeth 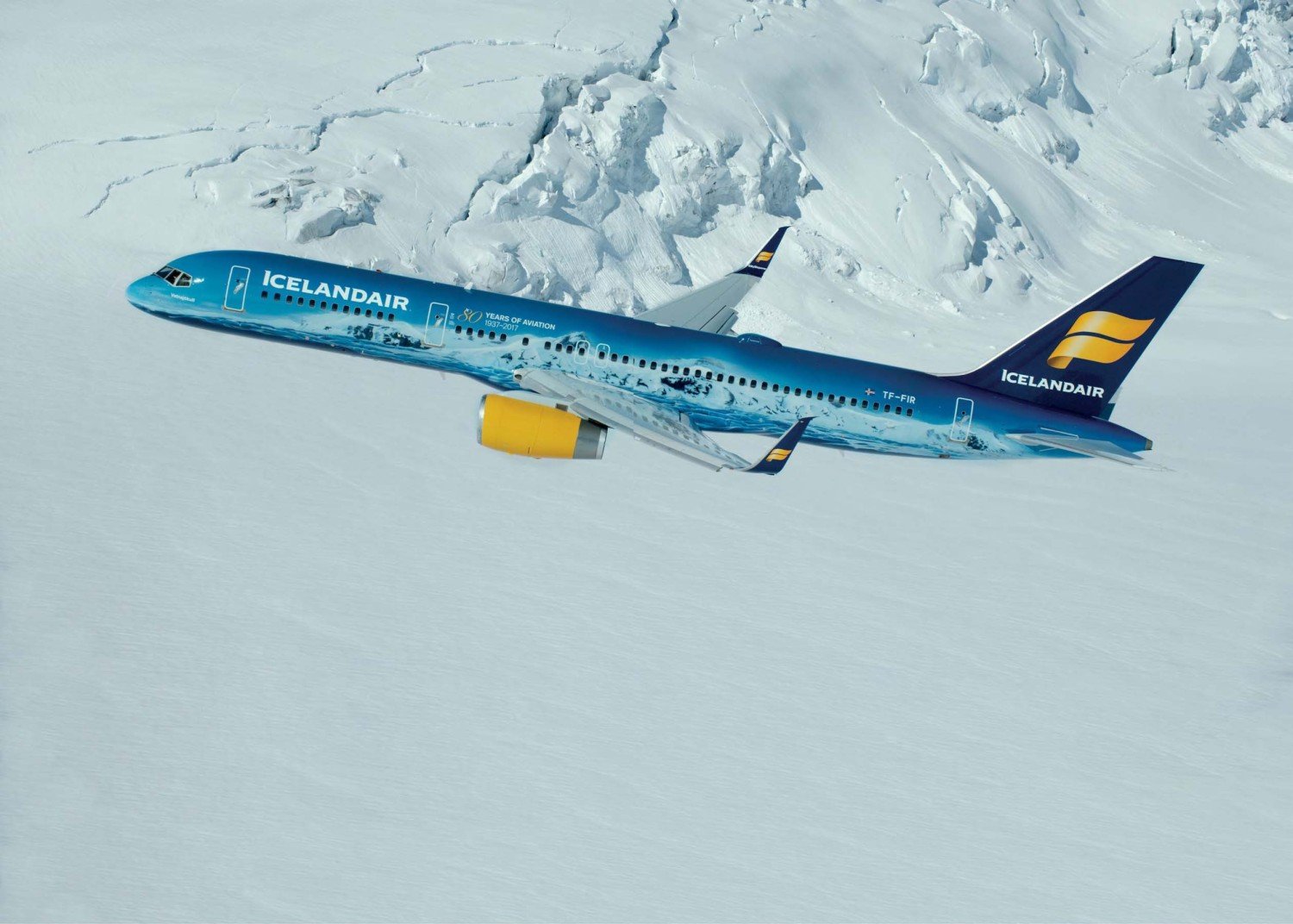 Boeing 757 TF-FIR (c/n 26242) is one of two specially painted 757s in Icelandair’s fleet, with a representation of Europe’s largest glacier over the whole fuselage. Icelandair

It was a double whammy for Icelandair. First, it was hit by the financial crisis that affected the island country in the North Atlantic hard in 2008. Only six months earlier, Birkir Holm Gudnason had taken over as Chief Executive Officer, a post he still holds ten years later.

Speaking to AIR International in his office at Reykjavik’s domestic airport, Gudnason recalled: “That was a tough time for Iceland. Many here lost all their savings and their jobs, but we developed close cooperation between us, the government and the tourism industry. At the same time, we made sure to become leaner in our organisation and changed our strategy.”

Yet just when the worst seemed to be over, the next setback came.

The eruption of the volcano Eyafjallajökull in April 2010 hit the airline hard again. Though Icelandair never totally ceased operations, it had to relocate its operations temporarily to less-affected Glasgow. Of course, performance and the bottom line were hit. While in 2008 Icelandair operated 12,234 flights to and from Iceland, the number decreased to 11,394 in 2010.

Fortunes for the carrier have drastically improved now. There are currently 34 aircraft flying in Icelandair livery, almost three times as many as in 2008. The four-million passengers mark was hit for the first time in 2017, when in its 80th anniversary year the airline carried 4.1 million passengers. It was in 1937 when Flugfélag Akureyrar was founded, from which today’s Icelandair emerged in 1979 after many mergers.

The number of flights today is more than double that of 2010. Gudnason said: “In 2016 our annual capacity increased by 20%, then again by 12% in 2017. For the last six years there [has been] annual growth of 15 to 18%.” The effect is that slots at peak hours have become scarce at Iceland’s only international airport and the airline’s hub in Keflavik, especially since local low-cost competitor WOW Air is growing fast, too. Gudnason said: “Growth here is limited only due to the lack of infrastructure. Keflavik is still an efficient hub for us, but it has to expand.”

In 2017, Keflavik Airport recorded a passenger increase of 28% and handled almost nine million passengers, an unbelievable number for a country of only 340,000 inhabitants living in the least densely populated European country. Gudnason said: “Only in 2022 or 2023 will the first phase of the airport’s masterplan be implemented with a terminal extension. Until then, we will have to handle 30 to 50% of our flights on remote stands.” Not always desirable for passengers in the often harsh Icelandic weather.

When asked for the reason behind the boom, all Icelanders say the same: the volcanic eruption in 2010 has raised interest in the island, especially for travellers from further away who now long to visit. Iceland has seen many foreign low-cost carriers start to serve Keflavik, multiplying capacity and slashing fare levels. Airlines are reaping the benefits of concerted efforts to position Iceland as a must-see travel destination.

However, it’s not even the glacier-covered island itself that’s creating the big passenger numbers, but rather transfer traffic. Due to its ideal location in the middle of the North Atlantic, halfway between Europe and North America, Icelandic airlines have been focusing on cheap transatlantic connections since the 1950s.

Today, Icelandair’s route network resembles a big butterfly. The European ‘wing’ spreads from Helsinki to Madrid, with almost all flights being routed through Keflavik to the American side, where destinations range from Anchorage in Alaska to Tampa in Florida. Much has changed here, as well. According to Gudnason: “In 2009 we just served five cities in North America; in 2018 we fly to 20 in total, including our new destinations Dallas- Fort Worth and Cleveland.”

The longest routes are those from Iceland to Portland and Denver, each taking about eight hours. In Europe Icelandair serves 30 cities, with the focus on northern Europe. In the UK, the airline serves London Heathrow, Manchester and Glasgow. From Barcelona, Madrid or Milan, the flight to Iceland takes about six hours, so there is no time advantage in routes from these airports to America. “Of course, there is also no time advantage from London to New York, but on many connections we are the fastest.”

To Anchorage, Icelandair is five hours faster than the next fastest flight from Europe. Gudnason said: “Ninety per cent of our passengers are non-Icelanders and half of all passengers transfer in Keflavik; 30% of these stay for a stopover.”

Passengers are entitled to stay in Iceland for up to seven days without having to pay higher fares, and the idea is to lure them back for longer stays. Gudnason continued: “The other half of our customers travel to and from Iceland, of which 30–40% are visitors and 10–20% locals.”

Despite the boom, Icelandair from a global perspective is still a niche operator. Gudnason said: “On the transatlantic market, we have an overall market share of just 2–3% – more on secondary routes.”

Icelandair has established a very elaborate wave system at its hub with minimal transfer times; the official minimum connection time is a mere 35 minutes. Between 07:00hrs and 08:00hrs, the first wave of flights leaves Iceland on its way to Europe and returns between 15:00hrs and 16:00hrs. The second wave from Iceland to North America departs between 16:00hrs and 17:00hrs, to land back on the island again early the next morning between 06:00hrs and 07:00hrs before the cycle starts again. 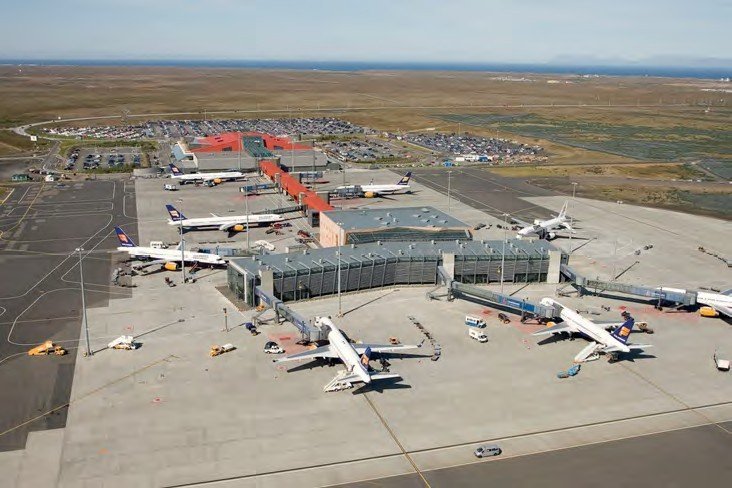 A major part of Icelandair’s growth, the airline is using its Keflavik hub to feed traffic between Europe and North America. The airline has established a very elaborate wave system for departures, with an off cial minimum connection time of 35 minutes. Icelandair

In summer, there is an extra wave for America flights that leave Keflavik around 10:30hrs and return around midnight. In this peak period, the most important destinations, such as Boston, New York JFK and Newark, are served three times a day. Gudnason said: “We could even increase our transatlantic off erings if necessary. We are a natural hub; there is no limit.”

Still, he believes in conservative growth: “We are only doing one step at a time. We first looked how it went in 2017 before we planned for 2018.”

Tough competition over the pond is a problem that also affects Icelandair. Gudnason admits: “There is overcapacity on the North Atlantic. Yields went down for us from 2016.”

However, at the same time he stresses Icelandair’s constant profitability since 2009.

We can fly the 737 MAX on 70% of our routes; only Seattle, Denver and Portland are too far.” According to Gudnason, the 737 MAXs are “ideal to warm up new routes like Cleveland, Montréal, Philadelphia or, in Europe, Billund and Bergen. That enables us to adapt better to different markets or even serve some routes twice daily in winter.” Initially, the MAXs will be deployed to Berlin (a new year-round destination) and Paris-Orly, as well as Bergen, followed by Cleveland and Dublin.

“We could even increase our transatlantic off erings if necessary. We are a natural hub; there is no limit.” Birkir Holm Gudnason, Icelandair’s Chief Executive Of cer 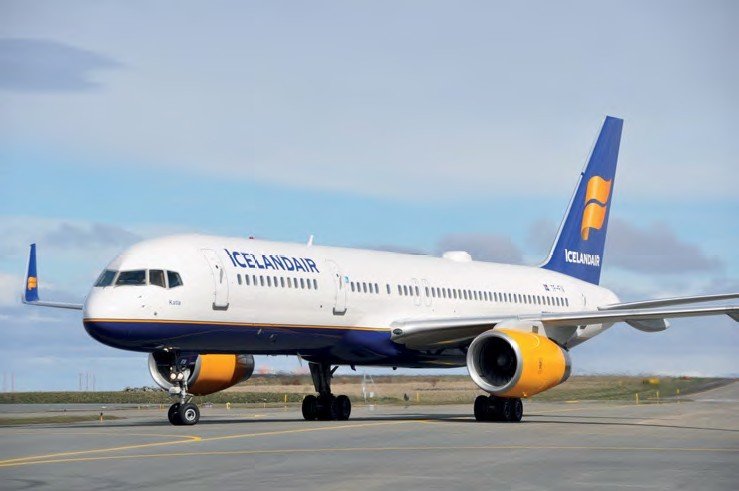 The 29 Boeing 757s used by Icelandair are the mainstay of the carrier’s operations. Andreas Spaeth

This doesn’t mean the 757s will be retired any time soon. According to Gudnason: “Most of them only have half of their life cycles behind them. We can keep them until 2025 or even 2030, but we are waiting for the new middle-of-the-market aircraft from Boeing. We have to find the right aircraft for the right markets, not the other way around.”

Restricting the fleet almost exclusively to 757s helped Icelandair to keep costs down, with these very reliable aircraft utilised up to 20 hours a day. Whether there will be more 767s added on top of the current four hasn’t been decided yet. They are deployed on bread-and-butter runs like those to the United States west coast or into airports with slot restrictions, such as Heathrow. All Icelandair jets are equipped with new cabins and Wi-Fi on board, even free for passengers in its Saga business class.

Icelandair names its aircraft after Icelandic volcanoes as part of a very effective way to promote Iceland, and there is exclusively Icelandic music played on board. A perfect example of the very visible Iceland marketing efforts is the stunning special liveries currently flying on two 757s: Hekla Aurora (TF-FIU, c/n 26243) in the colours of the Northern Lights and Vatnajökull (TF-FIR, c/n 26242) sporting a stunning depiction of Europe’s largest glacier over the whole fuselage, unveiled for the 80th anniversary in 2017.

Gudnason concluded: “I think we as an airline have the same mentality as Icelandic fishermen: they go out and don’t come back before they have done everything to catch the fish and get the job done”.

The last few turbulent years have shown Icelandair achieves that.