With the lockdown and social distancing rules in place, BWI Thurgood Marshall Airport held its first vitual public planning meeting. Carroll McCormick tuned in to hear the questions posed by the communty.

When Marshall in Maryland BWI Thurgood Airport was unable to present its plans to the wider community because of social distancing requirements, it found an innovative solution – a virtual public workshop (VPW).

On May 21, a panel of airport planning officials and consultants presented a 2020 Updated Draft Environmental Assessment (EA) and Draft Section 4(f) Determination document to members of the public and invited their comments. It replaced an in-person meeting planned for March.

“This virtual meeting format is an innovative step. We worked closely with the Federal Aviation Administration [FAA] over the past couple of months to hold a public workshop in this virtual format,” said Jonathan Dean, the airport’s director of communications.

The updated EA included changes made in response to public comments received on the previous draft EA. Changes in the new document included modified fleet plans in the aviation activity forecast. It also updated the analysis of the airport’s future and addressed impacts related to projects that the FAA had approved since the earlier document was published.

New elements BWI Marshall Airport had identified the need for several improvements to meet FAA design standards, to enhance airfield safety, to accommodate passenger demand and improve customer service. These resulted in several changes to the 2020 assessment. For example, proposals for a hangar, a perimeter road and a property acquisition were dropped. Additions included a new airline maintenance facility and relocating a fire training area.

The airport also added projects that had been identified in Phase I of the 2015 Airport Layout Plan. These included improving, building and relocating taxiways and aprons, expanding the aircraft rescue and firefighting facility, constructing a second fixed-base operator, expanding aircraft de-icing pads and increasing de-icing chemical storage. It also noted a proposed new aircraft hangar and a Sky Bridge that would create a direct connection between the airport terminal and the parking garage.

After the presentation, the panel opened the floor to viewers’ questions. Two projects that would have impacts outside the airport property – the airline maintenance facility and the relocated fire training facility – plus the need to remove trees growing on private and county property beyond the north end of the airport, received particular attention.

Access to the new maintenance facility and fire training area would require new roads. Secondly, aircraft engine run-ups at the maintenance facility would increase the amount of noise made in that area. The workshop panel fielded questions about these, as well as about the removal of trees that had grown high enough to present a potential hazard to aircraft.

Regarding noise, the presentation showed only a slight change in one of the noise contours. One viewer texted: “The current [aircraft engine] run-up level at the airport is already a problem. Why not [introduce] sound barriers?” Royce Bassarab, environmental planning senior project manager with the consulting company HNTB, answered: “Right now there are very few engine run-ups at the airport ... the majority of the run-ups would be shielded by buildings and [ground] contours.”

The proposal that generated the most questions was for the removal of about 1,100 trees. They ranged from asking by how much the trees would be trimmed, to whether whole swaths of trees would be cut down. 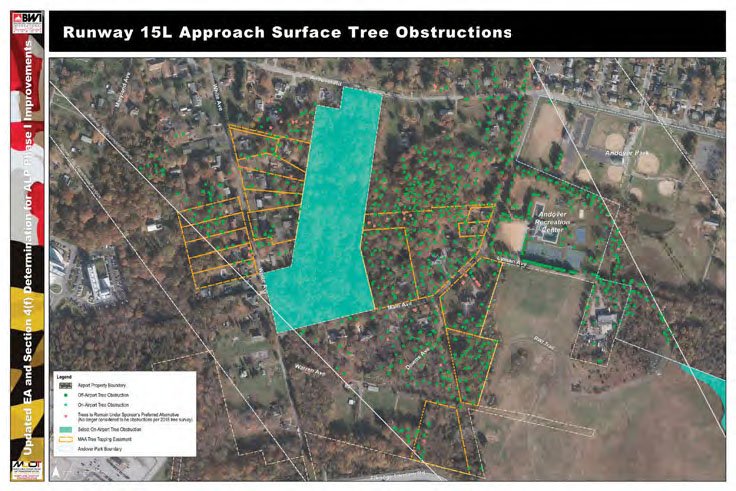 The event allowed BWI’s planning officials and consultants to share information with the public regarding changes to the project, such as the a new aircraft maintenance facility, (below), and the removal of about 1,100 trees, (right) BWI 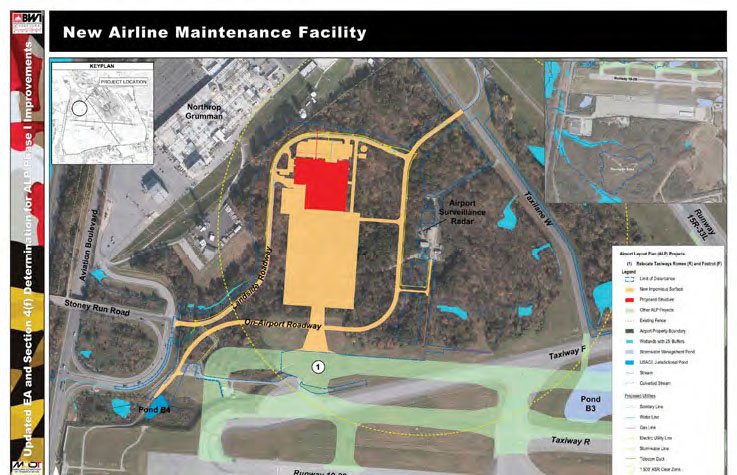 Having presented the main points of the 2020 EA, including impact to wetlands, flood plains and surface water, the workshop panel explained the next steps:

The public would have until June 4 to file any additional comments, after which time the final EA will be prepared and sent to the FAA for a decision. The process will be completed by early autumn 2020. ai