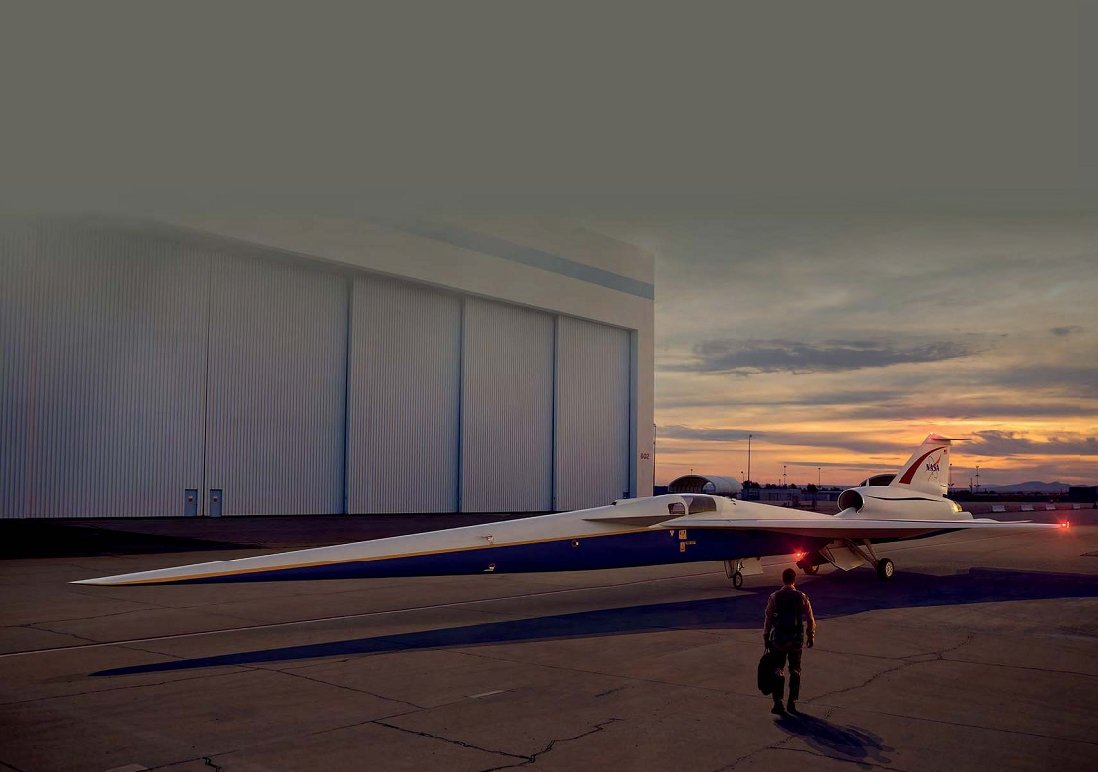 An artist’s impression of the futuristic-looking X-59 QueSST, which will be used by NASA to research quiet supersonic flight.
NASA

RETURN to the days of routine supersonic passenger air travel, which ended in October 2003 when Concorde retired, is still many years away.

However, steps towards a new era of supersonic passenger flights are being taken with NASA’s Low- Boom Flight Demonstration mission.

This programme has two goals. The first is to produce a piloted, largescale X-plane with technology that reduces the sound of a sonic boom to a gentle thump. The second is to fly that X-plane over select communities across the United States to gather data on human responses to low-boom flights that will inform US Federal Aviation Administration decision-making about future overland supersonic flights.

There have been two significant steps forward in the Low-Boom Flight Demonstration programme recently. First, Lockheed Martin’s famed Skunk Works facility in Palmdale, California, has started producing components for the X-plane that will be used in the programme, the X-59 Quiet Supersonic Technology (QueSST) demonstrator.

Second, and just as significant as the start of fabrication work for the X-plane, NASA recently undertook the Quiet Supersonic Flight 2018 (QSF18) campaign offthe coast of Texas, a series of research flights measuring a community’s response to sonic booms.

The X-59 QueSST is the first NASA aircraft for 20 years to receive an X-plane designation. Designed from scratch to fly faster than sound using the latest quiet supersonic technologies, the aircraft will be 94ft (28.6m) long and have a 29ft 5in (8.9m) wingspan. Powered by a single jet engine, its design research speed will be Mach 1.42 at 55,000ft.

NASA awarded Lockheed Martin a $247.5 million contract in April 2018 to build the X-59 QueSST and deliver it to its Armstrong Flight Research Center at Edwards Air Force Base by the end of 2021.

Research flights with the aircraft will start in mid-2022.

A Concept of Operations graphic for the Low-Boom Flight Demonstration mission released by NASA shows the testing campaign involving the X-59 QueSST will have three phases. Phases one and two will be conducted within the R-2508 Complex at Edwards, with overflights of the base’s community (NASA’s facilities and some of its aircraft at Armstrong, including its F-15 and F/A-18, will support these phases). A third phase will see the X-59 deployed to communities in other parts of the United States to conduct “low-boom community response overflight studies”.

It is this area, public acceptance of low-boom noise, which is crucial for the future viability of supersonic air travel (overland supersonic flight in the United States has been prohibited since 1973). The X-59 QueSST will gather data that will be used to develop what NASA calls “new sound-based rules” regarding overland supersonic flight, which, the agency says, “would open the doors to new commercial cargo and passenger markets to provide faster-than-sound air travel”.

Another step in this public acceptance aspect of researching quieter supersonic flying came recently when NASA measured how people on the ground respond to sonic booms with the QSF18 campaign, which tested a manoeuvre designed to create a quieter sonic thump.

The QSF18 campaign took place offthe Texas coast and involved the Boeing F/A-18 from Armstrong Flight Research Center. During three weeks in November 2018, the jet undertook flights in a track near to the coastal city of Galveston. Test pilots climbed to an altitude of around 50,000ft in a segregated block of airspace just offshore before putting the aircraft into a supersonic, inverted dive. The manoeuvre was designed to create sonic boom shockwaves in such a way that they were quieter in a specific area.

NASA set up 20 audio sensors around Galveston to measure the acoustic exposure and recruited 4,500 members of the public to respond to a survey about what they heard. NASA researchers will now match community feedback to the sound levels of the flights gathered by the microphone monitor stations on the ground.

NASA’s Commercial Supersonic Technology Project Manager Peter Coen commented: “QSF18 is a big step in NASA’s efforts to understand what is required for acceptable supersonic overland flight. This is the first time in decades that we have reached out to a large community as part of our supersonic research. NASA has performed similar tests at our Armstrong Flight Research Center, using similar sounds created by the same F/A-18. We’ve measured the noise levels and the impact on structures, as well as surveyed people for annoyance, to make certain that these tests are safe and well planned.”

Galveston was selected as the location for QSF18 because it fulfilled several criteria, according to NASA. The city’s island location made it “ideal for sound placement on population”, while the city’s population density and distribution presented an opportunity for “good survey participation”. Furthermore, NASA’s nearby Ellington Field facility made it easy to undertake aircraft operations while the Federal Aviation Administration had confirmed the QSF18 operations would have a minimal impact on commercial flight operations at nearby Houston.

The data from QSF18 will be collated and used to create what the agency calls “community response models” to provide a baseline against which the noise generated by the X-59 will be measured when it undertakes its supersonic flight trials. Mark Broadbent